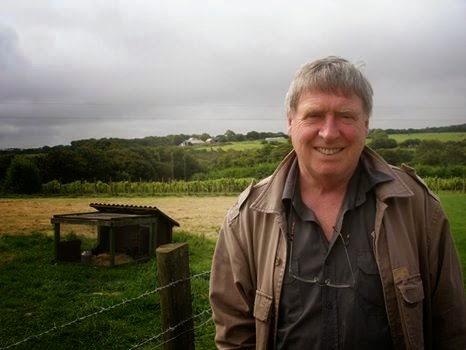 I have been given permission to publish an email sent by Richard Collins (Linen on the Hedgerow) to one of our readers at a time when he was undergoing much suffering. I was trying to find words to introduce the email to you, but it actually speaks for itself. I will only say that I think this is something which can and will help many people in their suffering. Thank you to Richard for writing it; to his family for allowing us to share it, and to the reader who forwarded it to me.

We are hoping other Catholic blogs will give space to Richard's email, so that as many people as possible benefit from his manner of suffering with Christ and the Church.

Please do say a prayer for Richard, his family, and all those who are approaching death.

When I was in hospital I found the long nights awake particularly hard. So, I imagined Christ in His cell the night before Calvary and I joined Him there.

I took great comfort from the fact that I was able to share my suffering alongside Him.
Over the nights that followed, more visitors came to the cell. St Therese de Lisieux, the Venerable Fulton Sheen, Pope St Pius X, Padre Pio.

I began to look forward to my night time meditations and even added a priest friend also suffering with terminal cancer.

It was quite a group that gathered each evening; we began to pray for friends and family in need (including yours).

This has been a great source of comfort and understanding and, every evening, I remember [.....] and yourself in my prayers.

May God bless Richard, all the faithful departed, and grant courage, peace and strength to those left behind. Amen.
Posted by Fr Dickson at 22:23