Decentralisation or Degeneration into Protestantism?

Apparently this poster is popping up all over Rome, something that has not happened since the end of the Papal States. That superb blog Rorate Caeli translates the poster for us as:
Ah Francis, you have intervened in Congregations, removed priests, decapitated the Order of Malta and the Franciscans of the Immaculate, ignored Cardinals... but where is your mercy? 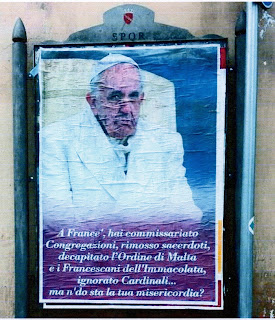 It is sad that a Pope is so publicly rebuked by the people he is called to shepherd, and just as sad that the people feel the need to make such a criticism so publicly. Ever since the election of Francis I have been defending him by saying I’m sure he has a good heart (a genuine desire to lift burdens from folk) and has not attempted to formally pervert the Doctrine of the Church (and as such is not a heretic). I still maintain these to be true. Francis does demonstrate a heart for the lifting of burdens from folk, and has not tried to formally impose any new doctrine on the faithful. That said, we cannot deny that there are things about this papacy that are disturbing faithful Catholics at their very core. For example, criticism of francs has been ubiquitous regarding:

his treatment of the Franciscan Friars of the Immaculate
his constant derision of Traditional Catholics in words that display no respect for, or charity towards, such Catholics who he labels ‘Pharisees’ and ‘Doctors of the Law’, and suggesting they are either hypocrites or have psychological problems
his off-the-cuff remarks that do are seen as contradicting orthopraxy and sound doctrine (such as the oft-quoted line ‘who am I to judge?’)
his footnotes in Amoris Laetitia which many see as leaving the sacraments open to sacrilege
his interference in the Sovereign Military Order of Malta (SMOM)
his extolling of Martin Luther, who tore apart the Mystical Body of Christ at the Reformation.

All of these come together to form a rather negative picture, so that Francis cannot complain about posters like the above or if he is described as judgmental (by Traditional Catholics), tyrannical (in light of his treatment of the Franciscans and the SMOM) or arrogant (in his re-writing of marriage in the Amoris latitia footnote). One person recently said to me in a slightly heated discussion, “It’s as they say Father, ‘power corrupts, and absolute power corrupts absolutely’ -Francis thinks being Pope gives him the right to dismiss Revelation.” I did remind my interlocutor that Francis has not imposed any new doctrine and seems to me to be a man of good intentions, but my confrere was not convinced.

While I think we can say still say that Francis is not officially declaring things contrary to the Doctrine of the Church and that his care for the marginalised is obvious (unless we are speaking of Traditional Catholics), we cannot deny that he is allowing others to publicly state things contrary to our Doctrine without correct them. The most recent example of this is the assertion by Rev Antonio Spadaro S.J., editor-in-chief of La Civiltà Cattolica and confidante of Pope Francis (See Lifesite News) that “Theology is not Mathematics. 2 + 2 in Theology can make 5. Because it has to do with the real life of people.”

That statement advances relativism and subjectivism. True, theology is not mathematics -but that does not make our doctrine uncertain. Theology is the way we arrive at and explain a long-held belief, and doctrine cannot be discarded unless we say the Church has no real hold on Truth; that the Spirit of Truth has not been given and has not led the Church into Truth in accord with John16v13 -and if that is true, why should we accept the opinion of Spadaro or even the teaching of Francis -who may be allowing others to cut off the branch on which he is sitting: he cannot give us another teaching on marriage without it being as disposable as the immemorial teaching he is allowing to be swept aside by some epsicopal conferences).

Another of Francis’s questionable ideas is devolution of authority from Rome to episcopal conferences. As EdwardPentin noted in the NCR 2015:

…Francis quoted what he had previously written in his 2013 apostolic exhortation, Evangelii Gaudium: “It is not appropriate for the Pope to replace the local episcopates in the discernment of all the problems that lie ahead in their territories,” and, “in this sense, I feel the need to proceed in a healthy ‘decentralization.’”

To support the idea of decentralisation, some may point to the days of the early Church where they assume local Churches had more autonomy from Rome, but as St. Iranaeus said,

“the greatest and most ancient church known to all, founded and organized at Rome by the two most glorious apostles, Peter and Paul...With that church, because of its superior origin, all the churches must agree, that is, all the faithful in the whole world; it is in her that the faithful everywhere have maintained the Apostolic Tradition" (St Iranaeus, ‘Against The Heresies’).

Sadly, we now hearing of the desire to have control of the liturgy devolved to episcopal conferences, with a return to paraphrases of the official Latin Missal rather than translations as required by Poe St John-Paul’s Liturgiam Authenticam (see here). If Francis pursues the idea of devolution we cannot do other than arrive at a federation of churches with their own doctrine and their own worship –and the Universal Church will have disappeared. In effect, Francis would be duplicating the divided Anglican Communion, thus demonstrating himself to be Protestant at heart, or at least a very poor theologian. The author Aldo Maria Valli makes his own contribution (see Lifesite News, here):

‘…in the beginning, I was very happy with the election of Francis because I thought that for the Church in Europe and the West it would be helpful to see reality from a different point of view than usual. I thought that the South American Pope could give freshness and a youthful spirit to the Church as the Church in the West seemed to have grown tired. Step by step, I had to realize, though, that in Francis there exist a kind of inconclusiveness, too much doctrinal confusion, and a certain flattening of himself to the dominant mentality of the world, as we see in Laudato sì. My perplexity exploded after Amoris Laetitia.’

You may remember I was confronted by someone recently who said that Francis was deliberately trying to destroy the Church and is stocking the College of Cardinals with men of his own mindset so as to perpetuate that destruction. I denied this was the case and pointed out that ultimately, the Holy Spirit is in charge of the Church, but it is becoming increasingly difficult to defend Francis. I told a friend the other day that I am praying for Francis to be so moved by grace he will come to a renewed valuing of Objective Truth and see the unity of the Church as requiring a central authority and a stable liturgy. My friend replied simply, “I’m just praying for his conversion to Catholicism”. I offered ‘No Comment’ in reply.

One cannot be happy with the state of the Church today, but there is something good that attends the doctrinal and disciplinary chaos surrounding Marriage and the Eucharist we currently see: it encourages those who do not truly have The Faith nor a real love for The Church to come out of the woodwork under the guise of loyalty to the Papacy, with the result that when Francis is taken from us by God we will know who is Catholic and can be trusted in the episcopate, presbyterate and pew: we will know who upholds the Truth and is therefore of God, and who does not uphold the Truth and is not of God -for where there is no Truth, there is no God: “I am The Way, The Truth and The Life” (Jn.14v6).
Posted by Fr Dickson at 14:57