My first thought is how the Cross is misunderstood by some souls. I was one of them. Despite Paul’s assertion that “God proves His love for us in that while we were still sinners, Christ died for us” (Rom.5v8),  for many years I looked at the cross and saw in it an accusation. It accused me of every infraction against the Ten Commandments I had ever committed. Then I went to Lourdes as an assistant chaplain on Day Pilgrims and the priest leading us, Fr Ian James Smart (pray for him please, he has since left the priesthood), did something no other priest with whom I had travelled to Lourdes had done: he stopped at the foot of the Via Crucis to point out the statue of the Angel of the Passion with its inscription ‘In Cruce salus’: In the Cross is salvation. It quickly became my favourite statue in Lourdes. 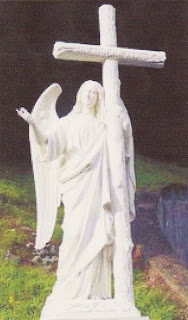 I finally began to get what Paul was saying: salvation cannot be deserved, won or bought; it is a free gift to all those willing to respond to the (actual) graces of God which prompt us to respond to His love by doing good and avoiding evil, that we may be filled with sanctifying grace. I realised that the Cross was not simply something Christ underwent for His friends who fail Him, but something he underwent for His enemies; His foe: those who deliberately attack Him. Enemies, not just failing friends. Enemies, not just the weak and disloyal friend. Enemies. The message of the Cross then is one I have to refocus upon often: I cannot earn, win, deserve or buy salvation: it is God’s free gift to those who seek Him. And who could not love, admire, and seek out the God who loves us so much that “He did the time for our crime” -which we committed against Him in the first place?

The Cross cancels out our sins; it fills us with grace. It offers to the Eternal Father an infinite Price for our salvation. No sin, and no amount of sins, no matter how dark, horrid and hellish, is or are beyond the power of the Cross, for its infinite merits have no end -and no sin can get beyond that which has no end: it is race sin cannot win because there is no end; no finishing line. As such the Cross is the world’s greatest treasure; God’s greatest gift to man. It is The Mystery of Faith: the mystery of God’s redeeming love.

Every Mass brings this Mystery of Faith to us and allows us to participate in it: “This is My Body given up for you...The Blood of the New and eternal Testament; the Mystery of Faith, which is shed for you”. This is the one day of the year when Mass should be celebrated, especially since we do not offer it on the day we commemorate the Crucifixion itself, Good Friday. How would one offer the Divine Hours today in commemoration of the Exaltation of the Holy Cross and not enter into its very reality at Mass?

My second thought is how easily today the Cross is abandoned. It struck me when saying Mass in the Ordinary Form this morning that while the people in the reading ask, “Why did you bring us out Egypt to this wilderness?” that Egypt is a type (as in typology; 'it stands for') the world from God is rescuing us. Folk of today who find commitment to The Faith difficult ask why they should be taken out of the world; out of their careers, hobbies, social circles etc, to become what people call ‘a religious nut’. For them devotion to Christ seems to be seen as an alternative to ‘life’: I have known daily Mass goers and converts who, when a career change, a new hobby, new social circle or new relationship come along, no longer exhibit devotion to the Lord by making the effort to get to Holy Mass. It just doesn't occur to them; they “have something important in life now”. Such a career, hobby or relationship, when it diminishes our devotion to the Mass, cannot be of God, for God does not bring about that which lessens our devotion to Him -and our hold on salvation.

For the genuine and devout Catholic nothing is more central than the Mass; the Cross, the Mystery of Faith. They know that our salvation, our happiness, is not primarily in our career, our social circle or our relationships, but in the Cross, and the Cross is in the Holy Mass. In Cruce Salus; nunc et in aeternum.
Posted by Fr Dickson at 13:22