The Nuts & Bolts of Marriage Today

I truly believe there ought to have been a law protecting persons in same-sex situations from having their Last Will & Testament over-ridden by family if they objected to the named beneficiary; it is appalling that someone’s dying wishes be over-ruled (though one must ask why a will, legally signed, not sufficient in law). It should have legally possible to protect those dying wishes without resorting to calling the living arrangement of the deceased and the beneficiary ‘marriage’. This only made marriage the recognition of a mere romantic attachment and not the establishing of a family for the building up of society. Now, it seems, we are seeing the idea of romantic attachment extended to other situations just as incongruent with nature: marriage to the dead.

A number of blogs have reported that a lady has been given the right to marry her dead fiancé (see here). It is beyond my comprehension that a person can be given the right to marry a dead person, since there is absolutely no possibility of the deceased giving their consent. The promise made in engagement is insufficient to supply that consent, because the promise of a possible future cannot at the same time be the concrete realisation of that future; it is either a promise or the event made concrete, it cannot be both.

I suspect many will see the illogicality of marrying the dead, but how many people who find the idea illogical yet give their support to same-sex ‘marriage’, which is also out of synch with nature? It is no less odd to ‘marry’ a man to a man or a woman to a woman because, even though consent can be given, it is consent to a union that cannot exist. Excuse this rather crude analogy, but attempting to unite two men or two women in a unity is like trying to achieve the union of two bolts or two nuts: no such union can be achieved.

Today’s world is simply using the word ‘marriage’ to mean any relationship in which there is emotional import, to give the word another meaning entirely, as was done with the word ‘gay’ (which I refuse to use since it seems this was coined in order to label homosexuality in an asexual, non-offensive, even joyful manner). Perhaps what we will see next, if emotional import is all that is needed for marriage, will be someone ‘marrying’ their cat so that the cat has a right of inheritance, or ‘marrying’ their childhood home because of the romantic associations it has for them (would this mean that if the house was sold or repossessed there would also have to be divorce proceedings?)

The world is showing the idiocy of atheistic thinking by registering as true the impossible union of the living and the dead, of male to male and female to female. It is idiocy because it is out of synch with our biological nature. As such, society cannot be relied upon as an authority for right living; cannot be relied upon for sound teaching or legislation on any moral issue, be that marriage, contraception, abortion, embryonic research, euthanasia et al.  Though we might construct some theory or other in order to justify diverse ‘marriages’, this is merely a use of the intellect to justify submission to our passions rather than use of reason for the control of our passions. Is there no end to this abuse of intellect and the abandoning of natural law?

Commentators: please, no saucy jokes about nuts or comments derogatory to the human person. 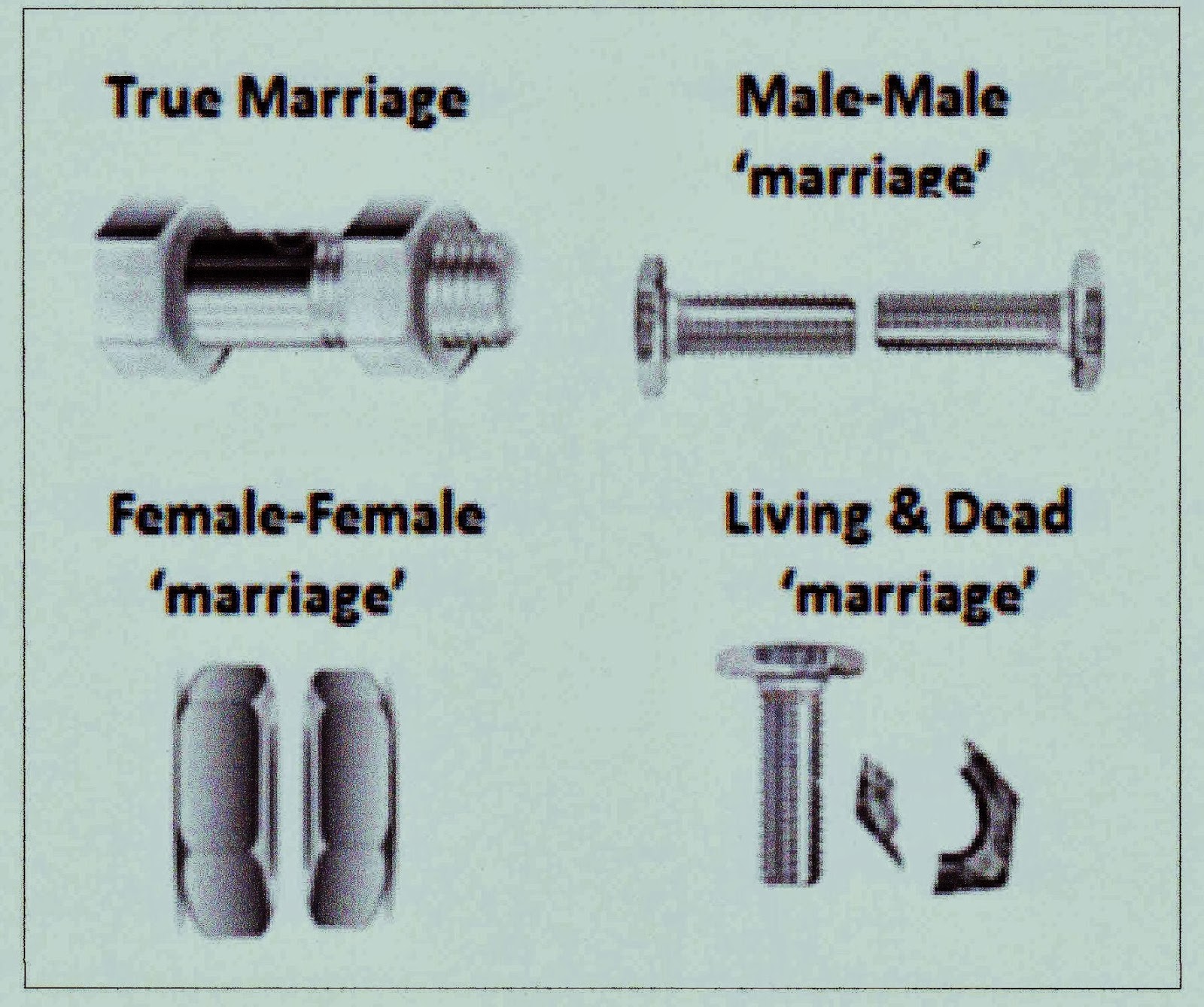