The IEC and Liturgical Norms

I have to be honest and say I have found the IEC in Dublin somewhat disappointing to view because, and despite the sincere fervour, dedication and the obvious prayerfulness of the people and all the hard work going on, it seems as though the attempts by Pope John Paul II to bring an end to irregularities in the liturgy (cf.Dominicae Cenae, 1980; Redemptionis sacramentum, 2003) and Pope Benedict’s call for continuity with Tradition in liturgy (Curial Address, December 2005) have never happened. While some excellent points have been made in addresses and homilies, we seem to have had little Gregorian Chant, despite the directive of Vatican II (Sacrosanctum concilium 116) that Gregorian Chant be given pride of place (even sacred polyphony was not given the prominence of chant, it being lumped together with ‘other kinds of music’ which are given the status of simply “not necessarily excluded”), yet we have had girls dancing through the congregation with bowls of incense and a Cardinal finding he has to use the Altar of Sacrifice as a lectern from which to preach during a Penitential Service.  These seem like regressions to the 1970’s when we thought the liturgy and sanctuary were at our personal disposal and the Order of Mass a framework: “have a penitential Rite, some readings, the Eucharist, and within all that, be imaginative; creative”.

Language in the Mass

Granted that the IEC is an international gathering, am I the only one to have noticed that the vernacular becomes very exclusive at such events? Let us say that there are six languages present: as soon as a particular language is used for an intercession during the Payers of the Faithful or at the proclamation of the Gospel,  five sixths of the congregation are left in the dark, and there is a feeling of, “Oh, here’s our bit” when one’s own language makes its appearance. As the Holy Father stated in Sacramentum caritatis (2007):

the proposal made by the Synod of Bishops, in harmony with the directives of the Second Vatican Council, [is] that, with the exception of the readings, the homily and the prayer of the faithful, it is fitting that such liturgies be celebrated in Latin. Similarly, the better-known prayers of the Church's tradition should be recited in Latin and, if possible, selections of Gregorian chant should be sung." (No. 62)

Despite the directives of Vatican II, the proposal made by the Synod of Bishops and the mind of the Pope (as well as the mind of Paul VI who issued Jubilate Deo in 1974 to retain a minimum of Latin chant), we rarely hear Latin used by those laity, priests or Bishops who profess loyalty to the said Council. If Latin were once again taught in Catholic schools there would be no ‘exclusion’ by use of it at Mass.

On a related note, as relayed to us by Father Henry, there was a decision to exclude exhortations to Eucharistic Adoration from Congress talks. This too takes me back to my time in seminary (the late eighties, early nineties) when it was common to hear that “the Eucharist was given so we could eat and drink It, not worship It”; and that “the Old Mass was too priest-centred”. But in all honesty, what have we got today? The Real Presence -to which the worship of latria is to be given- is placed in the corner like a naughty boy or shunted off to another room while the priest takes Its place at the apex of the ‘stage’ to face his audience/congregation. Surely, to remove the Lord from the apex and replace Him with the priest (who no longer faces the Lord rising in the East so as to lead His people toward Him but faces the people so as to engage them -often by humour and affectatious intonation in gesture and prayer) is to become more priest-centred than ever before?

The Novus Ordo and continuity with Tradition

In all honesty I prefer the Extraordinary Form. The Novus Ordo appears to have an in-built spirit of evolution which carries with it a kind of instability that for me does not sit well with the stability of the Depositum Fidei.  And while I do not reject the Novus Ordo as invalid or illicit, I do think it needs to be celebrated in a manner more clearly in tune with our liturgical tradition, which is possible if we

A significant number of young people are drawing closer to the Traditional Liturgy as the annual Chartres pilgrimage shows, 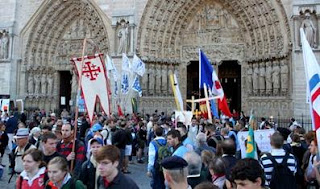 and I venture to say this is because in the Traditional liturgy God is clearly front and centre; His priest is facing Him and is leading His people toward Him. In contrast, the Novus Ordo frequently appears to be a setting in which we celebrate our giftedness and engage with one another across a table. 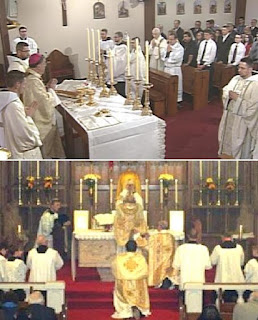 I suspect that many are not actually supporting the Novus Ordo itself but the innovations which followed its promulgation: Communion in the hand while standing; celebrants facing the people and pop-style ditties rather than sacred chant.  I further suspect that if we ask those who disparage the Traditional Form of Mass in favour of the Missanormativa if they would be happy to have the latter celebrated as it is given (with a sung Latin Ordinary, an altar-facing priest and Communion on the tongue safeguarded by the Communion plate) that few would say ‘yes’, because (subconsciously?) it is not the Novus Ordo they support but the innovations attached to it.

Why is following the norms, rubrics and a hermeneutic of continuity so important to me? Because by following directives about which way to face, which music to sing and how to receive Holy Communion in the most reverent posture, the liturgy allows me (and all of us) to give God at least one area of my life where Christ increases and I decrease; an area of life that can be relatively free from gross orientation towards self in adhering to one’s personal predilections. Don’t we all want to have such an area to give to God..?
Posted by The Collar & The Tie at 11:57