Forest Hall Royals -Thanking God for memories of my youth..!

I have lots of things in my life for which to thank God, beginning with my Faith, my family and my friends. I thank Him for time in my previous professions, and for whatever good I have been able to do as a priest -especially for the privilege of offering the Holy Sacrifice, of Anointing those about to leave this world, of Reconciling sinners to the Lord in Confession, and all the times I have been able to support folk in life’s crisis events.  In speaking of thanking God for things in life, I was recently shown photographs of days from my youth...

Bear in mind that the area in which I grew up was not an affluent area. Most of our dads were miners or labourers, while many of our mothers picked up a few bob (shillings) cleaning here and there. Few of us were from families with cars or telephones, and few of us took holidays in the UK, never mind abroad. Money was short; times were tough. For the most part my family and those kids I grew up with we played in the old field at the bottom of the lane, or we played ‘Canon’ with tin cans and a ball in the street -or simply “Knocking on Doors”. (I think children today miss out by playing with computer games instead of playing with other children). The photographs I was recently shown depicted a time when a good number of us from the area found a happy and useful focus: taking part in a Juvenile marching band. We were the Forest Hall Royals. We practised two nights a week and competed every Saturday during the summer. 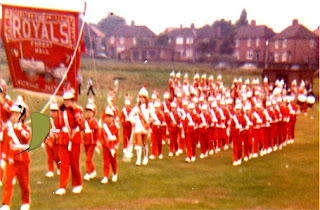 Before we began competing  -notice the absence of medal sashes

We ‘Royals’ won a good number of our competitions. For this we have to thank our manager Jacky Rowe, and our successive trainers: Mr Moody, Mr Hunter and Mr Mowett. Not to forget our ‘Committee Women’ and our loyal supporters, from brothers and sisters to mums, dads and Granddads.

There was a healthy sense of competition among the many bands of North East England, and it was always an exciting time to arrive at a competition and see who we were up against that day. If we didn’t win first place we would simply said “we’ll get them next time!” –though without real animosity. There were many bands to compete against, and I remember well those with whom our competition was most evident: North Shields Grenadiers; Byker Imperials; Walker Majestics; Longbenton Vikings; Newbiggin Harlequins; Meadowell Dragoons; Willington Revellers, Felling Fusiliers et al. Competition was tough; all of these bands and more besides, worked hard to achieve whatever wins were gained in competitions, which might take place in glorious sunshine, bleak drizzle or even rain. Whatever the weather, picnic lunches were eaten with enthusiasm, though sweaty, sodden buses on wet days were not the ideal environment...

Certainly we  Forest Hall Royals truly felt like royalty as we marched ‘On Parade’ through the streets in our bright red uniforms, or proudly executed our intricate display routine in the Display Arena. Our Drum Majors and Band Majors were skilled with the mace (I know Marie never dropped her mace once!); our Drum Section was spectacular and noted among the other bands; and military men brought in to judge competitions would comment on how well our kazoo section marched –though one or two never seemed to get their arm to shoulder height!

I can't say that all the band members got on even with each other -there was normal teenage rivalry even within the band about who would be Drum/Band Major, Lead Drummer or Mascot. It was certainly a prestigious thing to be a member of the Drum Section such as the Royals had, or to be Band/Drum Major. Still, we all stumbled along together as kids do, and enjoyed every bit of our 'Royal Days'!

And who could forget these little ditties we used to sing on the bus?

We were out one day
against the Grenadiers
we won 'Overall'!
We kicked them over the wall!
And when they shouted 'Jip!'
we miffed them angrily, in
Gilly, Gilly, Ossenfeffer
Katsenellenbogen-by-the-sea. 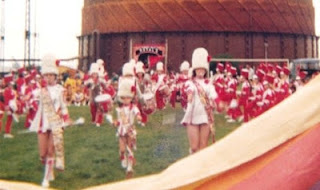 My Retirement Day: Me, Gail and May Retired together

Though we might laugh at ourselves now, we learned a lot during that time: team work, finding and losing friendships, a sense of responsibility for turning up at practices and events, taking care to keep a clean and well-pressed uniform and spotless white plimsolls. All of this played a part in the life of the Jazz Band member in any band. They were great days; and in fact, though few people know it, I still own a double-snare drum and a mace! A man of many talents...not!

Me filling in the for Band Major at gateshead Stadium(winning First Place on Parade!)
and with my beloved silver (lead) drum, my usual role 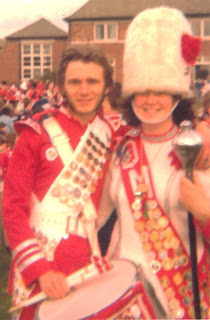 On my Retirement Day with a very dear friend

Some of Our Loyal Royal Supporters: Mam, Florrie, Maude and Anne! 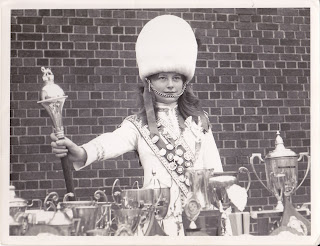 Marie Langlands, one of our most successful Drum Majors,
her mace was never once lost (dropped)

Why am I posting this on a blog with a religious theme? Because it was a truly happy time that was God-given, and I want to thank God for the six years of my life I spent in ‘The Forest Hall Royals’ during my teens. They are some of the happiest days of in my life; something I thank God for every day -as I do for my family, friends, former careers and priesthood.

Here are some of the Forest Hall Royals at a recent reunion (alas, I could not make it so you will not see me here) now parading as Forest Hall Debonaires...Oh the memories!