God alone can judge me

“God alone can judge me” is apparently becoming popular as a tattoo. Although it is just a fashion thing, it neatly captures the attitude of today’s secularist society and is might well be adopted by secularist forces to disarm Catholics in their criticism of today’s alternative or aberrant lifestyle choices, such as homosexual activity (today's hot topic), co-habitation, contraception, abortion and euthanasia. 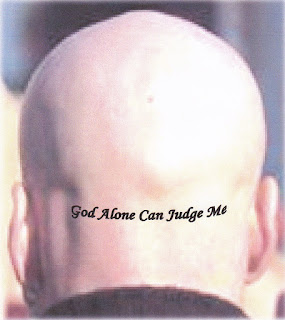 Sporting this tattoo does not mean the wearer is
following an alternative lifestyle; it can be a simple
statement of adherence to Gospel values; or a
statement that the wearer trusts themselves to a
‘higher power’, or an important reminder to us all
not to judge other people.

The tattoo is in fact, accurate: God alone judges persons. Yet it omits to add “and God has revealed the criteria by which I will be judged”. Remembering that God is the self-existing life-force of the universe from which all created life springs, acts which are uncooperative with His design for the transmission of created life (such as IVF and surrogacy) as well as acts which exclude the transmission of life (such as homosexual acts and artificial contraception) and acts which directly attack created life (such as abortion, euthanasia, violence) are intrinsically incongruent with God. Persons who knowingly, freely and deliberately engage in such acts thus put themselves in danger of forming their character in a way which is incongruent with God and Heaven. But it is for God to judge people, not others, and this is neatly summed up in the tattoo.

It is not that God will send souls who have formed themslves into incongruence with Him to Hell. Indeed, “God wills that all men be saved” (1 Tim.2v4), but if one deliberately, knowingly and freely forms one’s character in a way that is incongruent with God and Heaven, His judgement can only ratify that incongruence. The Church points this out to souls for their eternal good; to give them reason for disavowing disordered, harmful instincts. I do then, wish the mass media would stop portraying the Catholic Church as judging and oppressing people: the Church does not judge people but acts, for the good of people.  Indeed, we recognise that homosexual persons; those who contracept and those who abort etc, can be loving and kindly in their personality, and that they can contribute greatly in their professional life to the good of society. It is simply that we want to save their souls for Heaven by advising them against acting-out disordered thinking and passions.

That word ‘disordered’ has offended many in relation to homosexual and contraceptive activity, but as has been pointed out by others, if homosexual acts and contraceptive acts are normal, that must mean heterosexual sex and sex which is open to life are abnormal. That is nonsense, because sex is by nature reproductive. With this in mind, the claim that homosexuality is ‘natural’ to someone is false. It may indeed be something the person perceives as embedded in their character, but in that it is not something natural to the human animal it is disordered, and ought not to be affirmed and ‘fed’ by anyone, be they sociologists, psychologists or Governments. Souls should be helped to seek after their higher instincts, not fall prey to their disordered impulses -they are worth more than that.

So while it is true to say “God alone can judge me”, we do have to keep in mind that He has made known the criteria by which He will judge: it is found written in the biological nature of man; in the scriptures and the teaching of His Church which speaks with His voice (“He who hears you, hears Me”, Luke 10v6). We ignore His criteria at our peril. The sooner Governments around the world return to adhering to what is written in nature and scripture the better -for their own salvation and the salvation of those they claim to be liberating.

It is useful to remind ourselves here that it is just as perilous to ignore God’s other criteria too: we must keep the Sabbath holy (attend Sunday Mass and avoid servile works); we must refuse to kill (by refusing to support violence, abortion, euthanasia); we must stay clear of stealing (which includes oppression of the poor by Governments failing to provide adequate housing, health care and education; employers failing to provide workers with a just wage) and avoid false witness (detraction, calumny, gossip and insult).

In speaking of insult I want to add what I advise many a person: if you are in a situation of gossip, try at least to say “Well, I can’t criticise because I have my own faults”. Better still, note a good quality you have seen in the person who is the object of the gossip. If you are in a discussion about life-style choices, listen to the argument of your opponent, then have your say without getting into criticising persons. Acts we may and must criticise, but without judging the person or making disparaging remarks about them –we must, after all,  do the truth in charity (Eph.4v15).
Posted by Fr Dickson at 13:35